All events: Doors open at 7:15pm and music begins at 7:30pm.
Open stages: £4 on the door (cash)
Guest nights: Advance booking recommended, any remaining tickets available on the door for £10/£12.

8th Jan - Open Stage
15th Jan - Open Stage
22nd Jan - Open Stage - Guest MC - Hannah Sanders & Ben Savage
Following the success of a similar night in 2022, long-time friends of the Black Fen Hannah Sanders & Ben Savage return to MC our Open Stage. It's still an open stage so come along and sing/play/listen as you would usually, however there's more an emphasis on collaboration of these nights, so if you've always fancied an extra voice or another instrument on something you play (or want the whole room to sing with you!) then this could be the evening for you. Originally crossing paths in the session scene of Cambridge, Orphean Sprig are an instrumental folk band with a shared passion for the traditional music of Scotland. Comprising a guitar, three fiddles, and occasional viola, they explore arrangements of traditional, contemporary, and self-penned tunes, creating a rich texture and original sound. As a nod to their beginnings, they like to include an element of spontaneity in performances, a characteristic of the sessions in which they met.

Not long ago Lucky Sadie Comment was driving alongside fields of sugar cane by day and soaking up the sweet sound of Cajun waltzes by night. It was during her time in Lafayette, Louisiana that Sadie was able to meet up with her contemporary fiddle heroes Louis Michot and Anya Burgess. As a teenager she was heavily influenced by the Alt-country music scene that was rocking Chicago in the 1990s. She remains inspired by artists such as Jeff Tweedy (Wilco), Rennie Sparks (The Handsome Family) and the ladies of Freakwater. When not scraping beans at the local Premier Inn, Sadie can be found teaching violin and guitar throughout Cambridge, working on her balanced actions and musicality with beloved violin teacher Simon Cartledge or singing Lucinda Williams songs with her children.
Tickets: £8/£10 in advance

26th Feb - James Delarre & Saul Rose
James and Saul have been making music together for a long time now and re-launch their live act after time focusing energies on their young families. Born out of friendship, the duo intertwine seamlessly; dancing around the tunes between the notes, finding space and air breathing life into the music they create together.

Saul (Melodeon & Vocals) is well known for his work with the likes of Eliza Carthy, Faustus, Whapweasel & his role as the Songman in Warhorse. James (Fiddle) made a name for himself in bands like Markin, Topette!! & Mawkin:Causley. However this duo is truly greater than the sum of its parts - not to be missed.
Tickets: £8/£10 in advance 14th May - Finn Collinson Band
Widely regarded as one of the foremost recorder players on the English folk circuit, Finn Collinson has been steadily gaining a strong reputation for his energetic and creative performances.

He'll be joined on stage by Archie Churchill-Moss (Melodeon) and Evan Carson (Bodhran).

8th Oct - Hannah Read & Michael Starkey
Fiddler and singer-songwriter Hannah Read met banjo player Michael Starkey at an Appalachian old time session in Edinburgh in late 2019. The moment they first struck up a tune together there was an immediate meeting of musical minds. They have since become  a dynamic fiddle and banjo duo, playing repertoire deep from the old time tradition as well as newly self-composed tunes and songs.

Their compelling sound can be heard on the critically acclaimed debut album Cross the Rolling Water released on Hudson Records in June 2022.
Tickets: £8/£10 in advance 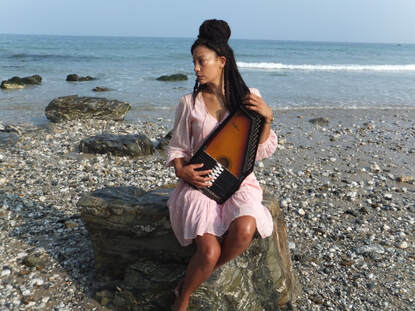 With a feral approach, a handmade sonic aesthetic and a belief in the importance of tenderness, Angeline’s original compositions and re-stitchings of traditional songs focus on storytelling and the small things that often go unnoticed. Sounds like solitude, memory, nostalgia, a rainy walk amongst trees…
Tickets: £8/£10 in advance